No data exist on how fast mola grow in the wild but one Mola mola individual in captivity at the Monterey Bay Aquarium gained 364 kg (800 lbs) in 14 months. Fattened up on a diet of squid, fish and prawns, this fish had to be airlifted out by helicopter and released into the bay after outgrowing its million gallon tank. (Powell. D. 2003 A Fascination for Fish, UC Press/Monterey Bay Aquarium Series in Marine Conservation.)

The longevity of molas in the wild is also a mystery although Kamogawa SeaWorld in Japan housed the same individual for more than 10 years in captivity. (Nakasubo et al. 2007, Growth of captive ocean sunfish, Mola mola Suisan Zoshoku 55: 403-407.)  A growth curve derived from repeated measurements of captive individuals estimated animals with a total length of 3m would be approximately 20 years old (Nakatsubo, T. 2008 A study on the reproductive biology of ocean sunfish Mola mola. Dissertation. International Marine Biological Institute. Kamagawa Sea World, Japan). Liu et al 2009 examined vertebral growth rings in Masturus from Taiwan and estimated lifespan of individuals greater than 2 to 23 years for females and 1-16 years for males. Accurately estimating and measuring the age of wild mola remains a work in progress. 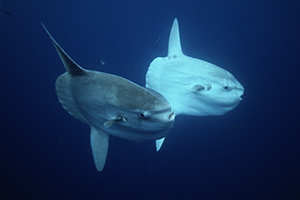 Mola come in a variety of gray and white patterns with some sporting your basic gray motif while others go for the more polka-dotted appaloosa style. Many also have a slight iridescent sheen. Certain geographic areas seem to have discrete color patterns—for example the mola in Bali appear darker than those off Southern California. Molas may have specific traceable patterns individual identification research is taking place in Bali and Galapagos.

Mola are capable of color changes particularly when stressed or under attack from a sea lion or other predator and can turn from light to dark within a matter of moments.

Mola mola eat a variety of foods especially when they are younger. Squid, sponges, serpent star bits, eel grass, crustaceans, small fishes and deepwater eel larvae have also been found in M. mola guts indicating that they forage at the surface, among floating weeds, on the seafloor as well as into deep water (Norman and Fraser, 1949). As they mature their diet appears to shift to include more gelatinous zooplankton—jellies including Portuguese man-o-war, Vellella, ctenophores and salps. Stable isotope work and DNA barcoding (Sousa et al 2016) has found that there is an ontogenetic shift in the composition of the Mola mola diet with smaller individuals ≤0.60 m eating more benthic prey items including crustaceans as well as teleosts while larger ones focus more on gelatinous pelagic zooplankton.

The diet preferences of Masturus lanceolatus are presumed similar to that of Mola mola. Bottom dwelling sponges and annelids have also been found in the stomachs of young Masturus (Yabe, 1953) and more small fish and various invertebrates, indicative of both benthic and pelagic foraging (Bakenhaster and Knight-Gray 2016).

Ranzania eat an assortment of crustacean, fish and molluscs including myctophid larvae, hyperiid amphipods, crab megalops, crab zoea and pteropods. Most feeding appears to take place within 150m (500 ft) of the surface (Fitch, 1969). Staff from the Monterey Bay Aquarium report having caught Ranzania while trawling for skipjack tuna so we know these little fellows can zip along. They also have been recorded to have squid in their guts. (Nyegaard et al 2017)