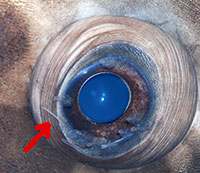 Lepeoptheirus sp. or Caligus sp .
Click for detail. Can you count them all? Photo courtesty Chris Potgieter
Sept 30,2007 at Crystal Bay, Lebongang, Bali Dive depth was 45m at the cleaning station. 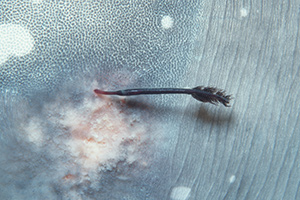 Didymozoid trematode
Removed from the inside of a Masturus lanceolatus in Hua Lien Taiwan–supposedly 1 in 100 Masturus there have these tumors.

Since parasites often sport multiple hosts, they can offer valuable insight into ocean sunfish interspecies associations. For instance, one sunfish parasite is the larval stage of a shark tapeworm so at some point the mola most likely falls prey to shark thus enabling this parasite to complete its lifecycle. For a list of known parasites of the family Molidae click here

The common sunfish, Mola mola, is infamous for its impressive parasitic load. Some 40 different genera of parasites have been recorded on this species alone. In fact, even their parasites have parasites–a fact reminiscent of Jonathan Swift’s quip:

So, naturalists observe, a flea
Has smaller fleas that on him prey;
And these have smaller still to bite ’em;
And so proceed ad infinitum

Masturus lanceolatus are not as heavily parasitized as Mola mola. And while they dive to great depths (Seitz et al 2005), they do not appear to engage in sunbathing to the same degree. Little is known about the parasites of ranzania, the slender mola.

There’s safety in great size for the ocean sunfishes but on the road to largess, they are open to many dangers. Bycatch through fishing certainly takes a toll on mola populations. And parasites presumably claim quite a few lives as well. Other predators include orcas (Gladstone, 1988) and sea lions.

During the fall months in Monterey, California, sea lions can be seen ripping the fins off sunfish and slamming the dismembered bodies against the sea surface. Presumably this action helps the lions tear through the molas’ skin which is leathery tough and several centimeters thick in places. However, after tossing the bodies through the air for several minutes, the lions often simply abandon their prey. Tragically the hapless, finless molas unceremoniously sink to the seafloor and are consumed slowly by seastars or anenomes.

Little is known about predation on ranzania, however an adult female (335 mm in total length) was found in the stomach of a marlin off Hawaii. Numerous ranzania youngsters have also been found in the guts of mahi mahi Coryphaena hippurus. (Sherman, 1961)