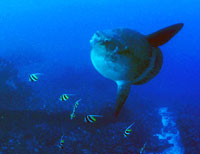 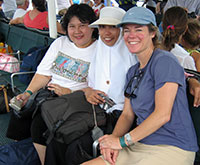 We just returned from an expedition to Nusa Lembongan—a tiny island in South East Asia off Bali, Indonesia where the giant ocean sunfish, Mola mola, come to indulge in the ultimate spa treatment—fish style. Between 20 and 50 meters, mola emerge from offshore waters close to the reef and solicit the exfoliating, cleaning services of fishes like butterfly fish Heniochus diphreutes and Chaetodon kleinii as well as wrasses like Labroides dimidiatus and Thalasoma lunare and adult emperor angelfish Pomacanthus imperator. The mola tilt their bodies backwards and just hang nearly motionless in the water column letting the little piscine cleaners work their magic on the mola’s veritable smorgasbord of parasites. For more on this cleaning behavior see Konow et al (2006) . 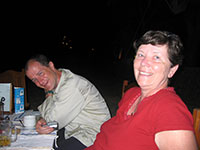 The trip was a truly exciting one punctuated by a number of noteworthy events. The day we landed, a suicide bomber blew up a car in front of the Australian embassy in Jakarta, killing nine people and injuring dozens of others. The bombers are thought to be from a group called Jemaah Islamiah, a regional network of militants bent on establishing a pan-Islamic state across Southeast Asia. While it’s the third bombing in two years, radicalism is really rare among the some 240 million people of Indonesia. Midway through the trip we had a 5.5 earthquake that made me feel quite at home since I live in California. And the day we left, Indonesia had its very first democratic elections and voted retired military general Susilo Bambang Yudhoyono into power. 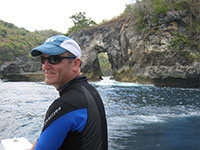 This trip was funded in part by a AAAS Women International Scientific Cooperation (WISC) grant to myself, Tierney Thys and Heidi Dewar and two Indonesian women scientists, Aidah Husain and Joeharni Tresnati from Hasanuddin University located in Southern Sulawesi.  One of our partners, Aidah Husain, is orthodox muslim and SCUBA dove the entire time in full head scarf and loose fitting clothes over her wetsuit. Didn’t slow her down a bit. Ambo Tuwo was also instrumental in helping this expedition take place. The National Geographic Society provided additional funds. 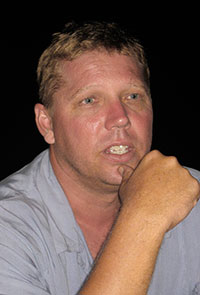 Trip logistics were made possible by the tremendously gracious help of Michael Cortenbach and his staff at Bali Diving Academy including videographer and mola whisperer Chris Papporakis. Also helping were the renowned marine engineer Brett Hobson, the very competent, long time Indonesian underwater faunal experts, Jos Pet and Mark Erdmann along with their amazing families and two eager volunteers from the UK and the US, Jamie Watts and Jackie Guccione respectively.  Tim Rock, photographer extraordinaire, documented the trip beautifully.

This was the first time we’d ever been required to hunt mola at depth.  Typically we tag topside since mola in temperate waters tend to bask on the ocean surface—a behavior that, in fact, has earned them their common name of sunfish. In tropical waters however they’re not seen as frequently on the surface. They do however occasionally breach—clearing the water by a body length or two before slapping back down–a behavior most likely due to cleaner fish getting a little too personal. Breaching may also simply be another way to remove parasites from the skin. And boy oh boy do mola carry a heap of hitch-hikers.

To tag we used a pneumatic speargun, specially designed by Brett Hobson, and snuck up on the mola using SCUBA gear. Time is limited at depth so if the fish weren’t there, we just had to come up and try again later after decompressing. And try we did. Whew, I thought we’d never get a tag out. A number of factors came into play. Firstly as mentioned above, this lovely place has been discovered by tourists so large numbers of divers descended upon our various tagging sites at fairly regular intervals making it difficult for the mola to settle into a comfortable cleaning posture required for precise tag deployment. In addition, a BBC film crew including expert videographer Peter Scoones and AP Emma Rolfe was filming the same mola for the Planet Earth series. Lots of people wanting mola and not so many mola to go around. In the end, everyone got what they needed. We got a tag out and the BBC got a lovely sequence. Incidentally if you want to see the mola we tagged, check out Planet Earth’s Ocean Deep episode. 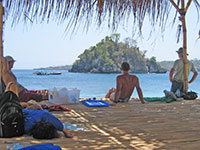 We did have to leave one tag behind along with the speargun since our time ran out but we knew it was in good hands. Within several weeks later, a jubilant email came from Michael Cortenbach reporting that he had gotten the second tag out on another mola.

Working with these mola underscored the need to clearly inform the growing numbers of tourist divers and dive operators how to dive non-invasively with these magnificent animals. To that end after we returned home, we worked with the folks at Bali Hai Diving Adventures, particularly Chris Lamont, and established a voluntary Code of Conduct for divers in order to preserve this unique dive experience.

We are also hopeful that our tagging work here, while in its infancy, can help create momentum to further marine protection efforts for the waters of Bali and beyond.