This marks the fourth year, the mola tag team has visited Kamogawa SeaWorld in Japan. Our first trip in 2001 included Heidi Dewar, Ellen Freund, Chuck Farwell from the Monterey Bay Aquarium and Tierney Thys. The last 3 trips (‘03,’04, ‘05) the team has whittled down to just Farwell and Thys. Celebration dinner with the wonderful staff from Kamogawa SeaWorld.

In order to transmit, the SPOT must clear the water. This means that only those marine animals exhibiting consistent surface bouts are viable tag- toting candidates. Such critters include marine mammals and turtles who must come to the surface to breathe; some species of shark that regularly slice the surface with their dorsal fins and several species of fish like striped marlin that stick part of their tail fins clear of the surface. We figure the ocean sunfish, with its characteristic surface basking behavior and habitat of flapping its dorsal fin out of the water, particularly in the high latitudes, is a prime candidate for SPOT toting.
SPOT tags have been successfully deployed on a number of fish species including salmon sharks, blue sharks, mako sharks and most recently striped marlin. Visit the near real-time tracks from the Tagging of Pacific Pelagics Project, part of the Census of Marine Life www.coml.org. http://las.pfeg.noaa.gov/TOPP/TOPP_tracks.html website to see the exciting and fun tracks of these animals (For more information on SPOT tags, see www.wildlifecomputer.com.) 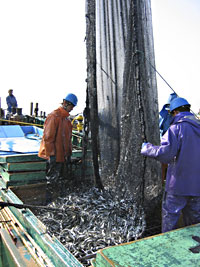 Plan B saves the day

While it may have been perfect timing for enjoying the serene profusion of cherry blossoms in Japan, it was suboptimal timing for capturing wild molas off the east coast.Nevertheless, our journey ended in success—thanks to the advance preparation of our consistently reliable friends at Kamogawa SeaWorld. Fortunately, back in March, the Kamogawa staff had collected 3 molas, as a Plan B, just in case the seas didn’t deliver during our April visit. Turns out they were right to plan ahead as the seas held tightly to their molas this trip.

Every year has presented different tagging challenges as well as a fair share of good luck. In the first year, 2001, we deployed 3 tags in April and all of them reported. Fortunately, one tag was retrieved by fishermen in the northern Aomori prefecture, sent to Kamogawa SeaWorld, and returned back to us wherein we extracted a complete and tremendously exciting data set. (Note: Retrieved tags offer up an uncompressed dataset while tags that release from the animal in the wild transmit their data only in compressed form.) In 2003, we deployed 2 more tags that both reported additional data and in 2004 one of our 3 deployed tags offered another dataset. At present, we are putting the finishing touches on our manuscript reporting the data from these tags.

This year (2005) in addition to deploying 2 more PAT tags, we decided to try something new—a real-time tag–called a Satellite Position Only Tag (SPOT). For details see sidebar.

As in past trips, our plan was to work with the fishermen of the Kamogawa Fisheries Association to capture, tag and release wild molas from set nets. Starting at 4:30 AM, we met with the head of the fisheries operation, Mr. Sakamoto–a strapping 38 year old–who’s been running this tight operation for upwards of 20 years. He and the head of the fish market, Mr. Watanabe, welcomed us with big smiles, black coffee and seaweed tea—like drinking a shot of hot ocean. These fishermen and the Kamogawa SeaWorld staff have become like family to us over these past years of working in Japan.

Sakamotosan and Watanabesan shared with us the daily printout of the Kuroshio Current location and temperature readings of the greater Kamogawa coastal area. Turns out the water temperatures had been unseasonably low for the past few days (13¾C) but were turning warmer since our arrival (17¾C). After finishing our tea, we were off to the boats in a flash.

Our first day out, the fishermen discovered the main set net—the one most likely to have molas–had torn substantially due to the previous day’s fast currents, rendering the net out of commission for at least 3 days. This left two set nets to sample. We headed to the near shore net.

Watching the harvest of these nets is quite an experience. Maneuvering a complex maze of yellow buoys outlining the net boundaries, the fishermen position 2 boats one across from each other to begin their haul. As they lift the net section holding all the fish, the water starts a slow dark boil. Hidden schools below press tightly together and a confetti of glitter rises up from the depths—silent sequins scraped from the skins of the panicked silvered swimmers below. With each tug of the net, tail fins and fin flicks smash and slice the surface frothing the water into silver white. A smaller net is lowered in to scoop up the living silver bounty and purse load after bulging purse load are pulled from the depths. Nothing escapes.

Day after day, the nets offered up large schools of anchovies and, on one day, a tremendously rare school of more than 400 good-sized yellowtail jacks, but no molas were to be found. With time running out, we had to embrace plan B and accept Kamogawa SeaWorld’s generous offer to use the molas they’d captured back in March. With the staff’s expert assistance, we placed one SPOT tag on the dorsal fin of their largest mola in the holding tank at the aquarium. The great benefit of doing this bit of new tagging on shore was that we could observe the tagged animal for two days and record its acclimatization to the tag process. It responded wonderfully well to its additional fin load. In fact, within just a few minutes of tagging, it slurped down a tasty mixture of squid, oysters, shrimp and tuna paste. For the remainder of our watch, the SPOT tagged mola expressed normal swimming behavior and the tag transmitted successfully each time the fish’s dorsal fin cleared the water’s surface in the holding tank.

Then it was off to the release point offshore–as far as the fishermen were willing to motor us away from their set nets. Right before the release, we attached the two remaining PAT tags, took genetic samples, measured total length and bid our little autonomous mola vehicles bon voyage and sayonara.

Random facts: Mola meat is selling for 500 yen/kg this year while last year, with more animals around, it sold for 350 yen/kg. 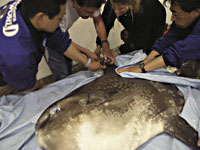 Affixing the SPOT to the mola 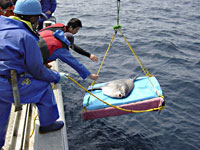 Releasing the mola to ply the waters and collect data. 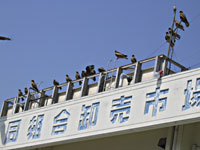 The magnificent fish hawks (black kites Milvus migrans) that welcomed us back at the docks with open talons. 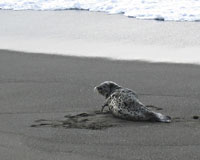 An adorable spotted seal (Phoca largha) that showed up on the beach the day we arrived.