Mola mola (Common mola)
The most common and widespread of ocean sunfish in the northern hemisphere is Mola mola. These fish, like all ocean sunfishes, appear as if their bodies have been somehow truncated leaving them little more than a large head punctuated with set of long dorsal and anal fins sweeping it along like a pair of vertical parentheses. The body is less than twice as long as it is deep.
Mola mola have a rounded tail when they are juveniles which can become scalloped as they age and become larger. Their scales are multi-cusped and jagged making their skin very gritty like rough sandpaper. They are covered with copious amounts of mucus and typically silvery in color with a slight opalescent sheen although their skin can exhibit strikingly changeable, light and dark spotty patterns. Their clavus is supported by 8-9 ossicles and these ossicles are narrower than the space between them.

Mola alexandrini is similar to Mola mola particularly in its juvenile stages but diverges as it matures by retaining a rounded clavus. (M. mola develops a wavy clavus in its largest size.) Their rounded clavus (pseudo-tail section) is supported by 14-24 (average 17) fin rays and 8-15 (average 12) ossicles, an enlarged bulbous head, chin bump and rectangular scales.

Mola tecta (hoodwinker sunfish)
Mola tecta reside in the southern hemisphere, with records from South America, Australasian waters and New Zealand. They have rounded scales and a distinct bad in the center of their clavus. 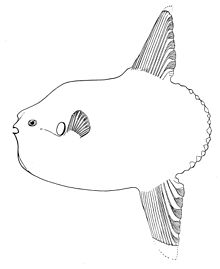 Mola ramsayi (Short ocean sunfish)
Etsuro et al 2017 suggests that Mola ramsayi be replaced by Mola alexandrini (see characteristics above). Mola ramsayi, commonly known as the short or southern ocean sunfish, has been recorded in numerous locations in the northern hemisphere. Investigations continue to see if Mola ramsayi should be fully retired as there remains some inconsistencies in some descriptions as well as numerous individuals that have a bump head and a wavy clavus—a mix of characters from the Mola mola and Mola alexandrini/Mola ramsayi. 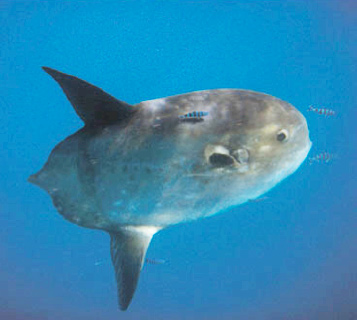 Ranzania laevis (Slender mola, dwarf mola)
Unlike other molas, the slender mola only reaches approx. 100 cm in total length. They are the most colorful and elusive of the ocean sunfishes. They have a smooth, thinner skin than any of the other molas and a vertically oriented mouth.
The Polynesians called these sunfish “King of the Mackerels”. It was seen as bad luck to catch and kill Ranzania for such an act would render the mackerel incapable of finding their way to the islands. While this is currently the only accepted species in the cosmopolitan genus Ranzania it is very likely that there are more species waiting to be formally described.