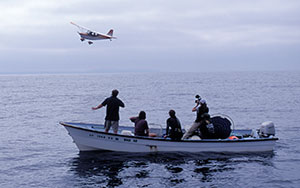 The mola team is pleased to report that another 7 PATs were deployed in the Southern California Bight this field season. Three were opportunistically deployed by Heidi Dewar during a juvenile shark abundance survey in July and another four were deployed by Tierney Thys in late September with the help of Eddie Kisfaludy and Nick Wegner of Scripps Institute of Oceanography. If all goes as planned, we’ll have another 7 healthy datasets by Spring 2007. A BBC crew including veteran photographer Mike Johnson filmed part of the September tagging for a 10 part series called Wild in California that is due to air in the UK, early next year. 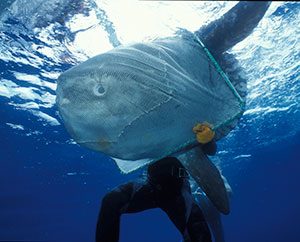