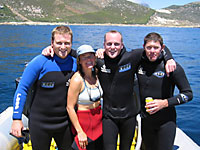 January was a great month for the mola team in South Africa! Working with the highly capable crew from Capetown’s Two Oceans Aquarium, we placed two more pop-off satellite archival tags on two sizeable molas (1.6 m in total length). The tag team included David Christie, Ed Hall, Anthony Lennox and Gerhard Beukes from Two Oceans and Tierney Thys from Sea Studios Foundation. August 23rd 2004 is when these tags are due to pop off and divulge where these African molas have been spending their time.

Three years ago, Thys satellite tagged a Capetown mola with the help of her husband Brett Hobson of Nekton Technologies and Mike DeMaine, Zaid Manchest and Mike Farquhar– from Two Oceans respectively. That mola traveled from Capetown up towards Madagascar between the months of January and August. Alas, that tag only communicated a couple times with the satellite before falling silent so we didn’t receive a robust data set. Fingers crossed we have better luck this year. 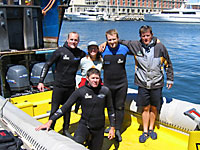 During this trip, we also collected additional mola tissue samples with the help of Clare Taylor, Vince Calder, Brett Naysmith and Alan Waddell from Two Oceans Aquarium. Jan Wissema from the Capfish (Capricorn Fisheries Monitoring cc) observers program is going to help coordinate the collecting of more samples so we can finally have enough data to decipher if we truly do have a new species of Molidae! So stay tuned for more mola news.

Tag team in the water with the mola off Sandy Bay near Capetown, South Africa 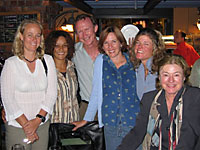 Celebration dinner at the Waterfront with Pat Garrett 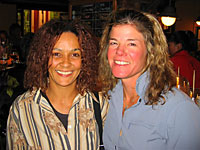