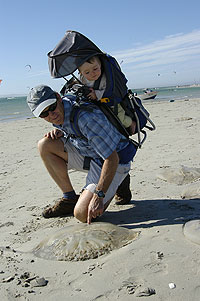 Brett and Marina investigate mola food on the beach of Langaban

During this visit Thys presented results from the 2004 South Africa tagging expedition where 2 Mola mola yielded strong datasets. The 2004 expedition was funded in part by National Geographic and a AAAS grant for Women’s International Science Collaboration. Thys also met with Samantha Petersen from Birdlife International. Petersen and her fisheries observers including Zoe McDonell have been recording large numbers of sunfish caught as bycatch in South Africa’s mid water trawling operations for horse mackerel (Trachurus trachurus capensis). McDonell is currently writing up these data as part of her Masters thesis with the University of Capetown. 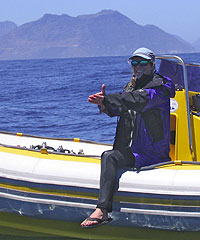 While the trip proved fruitful on many accounts, tagging proved difficult. Water temps were consistently low (hovering around 10 C) and winds were high. Only three sunfish were encountered during the search days of January 4th-10th and none of them proved taggable.. Tagging would have to wait until later in the year.

Cape fur seal ( Arctocephalus pusillus) posing as a sunfish
Photo by B. Hobson 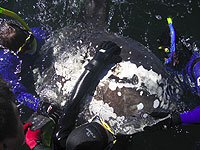 Getting ready to tag. Photo by N. Townsend 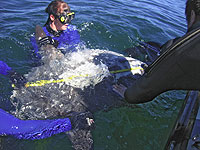 Measuring the sunfish with Timony holding the fin. Photo by N. Townsend 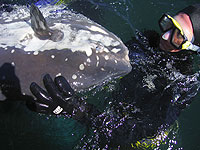 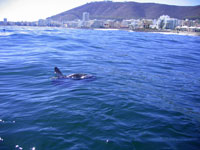 Tagged sunfish with Capetown in the background
Photo by N. Townsend 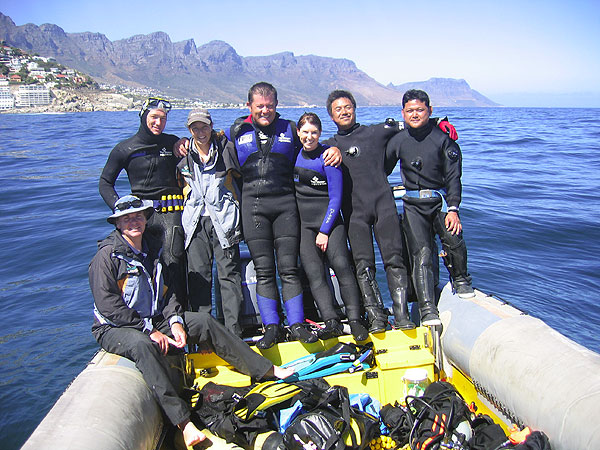 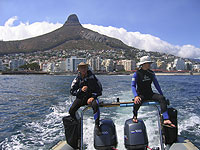 Vince and Tierney searching for sunfish. Photo by M. Farquhar